Today Our people, the Eritrean Afar are being mass displaced, mass murdered, their resources exploited, their social- economic way of life has been annihilated, their distinct identity and history is under threat and unrecognizable.

The current Eritrean regime is removing the Afar from Dankalia and colonizing the area with others.  In order to remove the Afar, the regime is using mass murder, rapes, kidnapping, political assassinations, and extrajudicial killings of Afar leadership.

The Afar leadership has filed numerous Human rights complaints against State of Eritrea with the United Nations Human rights council, the UN SR and the commission of inquiry in Eritrea.

In May 28, 2013 report to United Nations Human Rights Council, the Special Rapporteur Ms. Sheila Keetharuth, found that the current Eritrean regime has been systematically targeting the Eritrean Afar people with “extrajudicial killings, enforced disappearances, torture and rape” in order to “force [them] the Afar into displacement from their traditional territory” along the Red Sea. The United Nations Human Rights Council unanimously adopted the SR’s findings. (Para-K-Minority Rights). Read the report (PDF).

In Feb 2015, Human Rights Watch, in its annual World Report 2015, describes the situation of the Afar as follows:

Members of the Afar and Kunama ethnic groups flee because of land expropriations and discrimination by the government.

In June 4, 2015, The Commission of Inquiry on Human Rights in Eritrea (COI) has further validated Afar allegations with respect to Afar displacement from their homeland.

The COI stated the actions by Eritrean authority “may be construed as an intentional act to dispossess them [the Afar] of their ancestral lands, their livelihood and their culture” and that:

[…] the killing of members of the Afar ethnic group and reports of existence of Mass-graves have also triggered their displacement from their lands within the country and across borders to Ethiopia and Djibouti.

After successfully displacing the Afar from their resource rich and strategic coasts, Afwerki is now selling the land, the airspace and the territorial waters of Dankalia to the likes of the United Arab Emirates for billions of dollars.  National Marine Dredging Corporation owned by UAE is now removing the Afar from their traditional lands, homes, businesses and strategic coasts by bulldozing Afar Salt mines, uprooting thousands of indigenous Garrayto trees, fencing-off accesses to the sea in the area used by traditional Afar fishermen. Military facilities are being constructed after destroying Afar businesses, a new port and Airport dredging activities are clearing away and displacing hundreds of Afar families.

Some of the lands earmarked for this development contain the remains of my close relatives, in Mass graves which COI is referred to in its report. This is a crime scene that needs to be protected. 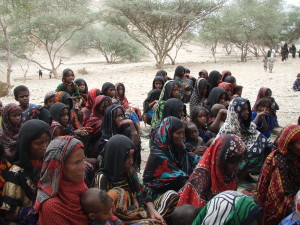 Afwerki and his Junta is now selling over 400 Square Kilometer of Potash rich Afar land and resources to another  multinational corporations from Australia, The Cullili potash project is estimated at Billions of Dollars and PFDJ elites own 50% of it. None of these corporations and foreign governments are concerned about Afar human rights violations, the in pact on the environment, and do not care for their corporate social responsibilities.