DANKALIA STANDS WITH AKHRIYA : A CALL FOR UNITY TO STAND AGAINST TYRANNY AND PERSECUTIONS IN ERITREA SCHEDULED FOR | November 11, 2017 Ottawa, Canada 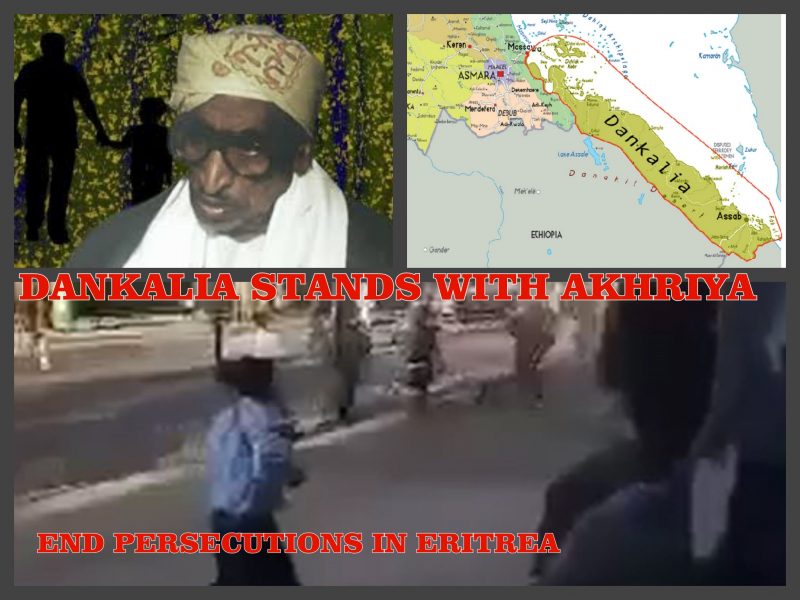 The most recent government crackdown on religious freedom began in a threat of closing down privately owned Al Diaa Islamic School and the arrest of an elderly sheikh and board member, Hajji Mussa Mohamed Nur along with the entire school board of trustees who still remain in detention.

On Monday, October 31st the residents of AKHRIYA, a neighborhood within Asmara, the capital of Eritrea took to the streets after Eritrean government’s excessive interference and suppression of their citizenship rights to exercise their religious belief.

This unlawful action by the g

overnment led to unprecedented street protests in a country where no freedom of press or assembly is allowed. Eritrea is one of Africa’s most reclusive and repressive state most often referred to as “the North Korea of Africa” by international Human rights observers.

Our organization (EANC) joins tens of thousands of pro-democracy, pro-change Eritrean Diaspora in condemning the violent actions by Eritrean government to suppress the human rights of our fellow citizens and especially stand alongside the heroic actions of Al Diaa School and the resistance movement of AKHRIYA who not only defied a crippling fear in the country but gave hope to tens of thousands more who fled persecutions due to various human rights violation in Eritrea.

Please join us for in-depth discussion on how to mobilize a peaceful resistance and restore the dignity of Eritreans.

United in the face of injustice in Eritrea!

These findings and conclusions are consistent with those of the Special Rapporteur on the situation of human rights in Eritrea, Sheila B. Keetharuth. In her 28 May 2013 Report, UN Doc A/HRC/23/53, https://documents-dds-ny.un.org/doc/UNDOC/GEN/G13/140/99/PDF/G1314099.pdf?OpenElement the SR stated at para 77: